One is the magic number for Lime Associates' Chairman 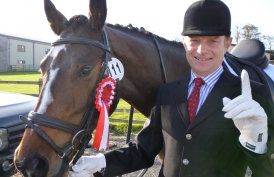 When Malcolm registered for a British Dressage affiliated competition at Port Royal, East Yorkshire on 1st November 2011, little did he know how significant the number one would become.

Competing on his eight year old gelding Marlon, Malcolm, allocated number 111, gained 70.8% in the Novice 20 class to win the competition.

Malcolm has only been competing on Marlon for a year at local dressage events and hopes to qualify for regional events in 2012.

Dressage is a French term meaning training and was developed by the Ancient Greeks to give their troops an advantage in combat. In the 17th and 18th centuries, dressage became fashionable and nobility used to stage grand displays like those still seen at the Spanish Riding School in Vienna.

In the 20th century, dressage became the competitive sport it is today and according to its governing body, British Dressage, its 14,000 members, 10,000 registered horses and 2,000 days of competition per year make dressage one of the fastest growing equestrian disciplines in the UK.