Scapa chief leads the team at the Great Manchester Run 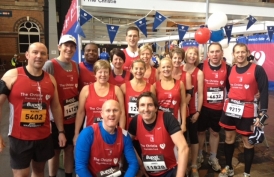 A Manchester company that specialises in bonding products and adhesive components for the healthcare industry hopes to have raised over £6000 for The Christie Hospital by competing in the Great Manchester Run.

The team of 18 colleagues from Ashton-under-Lyne business Scapa was led by Chief Executive Officer Heejae Chae and included personnel from HR, Finance, Purchasing, Shipping and Operations. Even visiting colleagues from Scapa NA in the USA extended their business trip to take part in the fundraising 10k run!

Speaking after the event that saw 40,000 runners pound Manchester’s streets, Mike Muchin, Scapa NA’s Global Industrial Business Unit Director said; “It was a great race and a fantastic atmosphere. I only came to the UK for a Leadership conference but was persuaded by my British colleagues to extend my stay so that I could take part and I’m really glad that I did!”

The team, with an age range from 25 to 54, hopes to have raised over £6000 through their own fundraising and the generosity of Scapa who will match colleagues pound for pound.

Amongst the team was James Cooper from Lime Associates, who is currently working for Scapa as an interim Global Category Manager and who took to the streets in custom designed running shoes with a distinctly corporate feel. James said; “I wanted to create a pair of shoes in both Lime’s and Scapa’s colours, so I designed some Lime green shoes with distinctive Scapa red trim – the only pair in the world as it stands! They didn’t make me run any faster, but people certainly saw me coming!”

The Bupa Great Manchester Run is billed as the UK’s favourite 10k race and has been run by over a quarter of a million people and has raised an estimated £22 million since it was first staged in 2003.

Scapa is a worldwide leading manufacturer of bonding products and adhesive components for applications in the electronics, healthcare, industrial and transportation markets and has production sites in Asia, Europe and the US. Its Group Head Office is in Ashton-under-Lyne.

The Christie Hospital is one of Europe’s leading cancer centre’s, treating over 40,000 patients a year. Based in Manchester, it serves a population of 3.2 million across Greater Manchester and Cheshire, but it is also regarded as a national centre of excellence and around 15% of its patients are referred from other parts of the country. If you would like to support Scapa’s fund raising for The Christie, you can donate online here

Categories: Lime In The News